Home :: Articles:: The History of the Swan, Chicken and Rooster as an ornament on Blown Glass

The History of the Swan, Chicken and Rooster as an ornament on Blown Glass 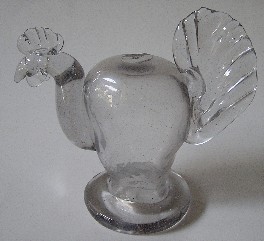 As far back as the 2nd century AD, the glass blowers in Rome were decorating their wares with a swan-like bird. Archeological digs have unearthed some of their small swizzle sticks that are decorated on top with a bird which looks somewhat like a swan.   These rods are believed to have been used for mixing cosmetics. Since those ancient times, there have been different legends about swans. Some suggest that the Greek God of the sun, Apollo, turned into a swan. Other mythology indicates the swan was the bird of Apollo or  that the swan was the god of music.  Some legends are more complicated suggesting erotic ideas like the swan being graceful and beautiful like a naked women. There is some suggestion that the swan was the image of satisfaction and desire.  Folklore suggests that chickens are a symbol of prosperity, because by owning chickens, a family would always have a food source.    In ancient and not so ancient times, all families needed the chicken as a food source. Therefore, it was also associated with survival.  With myths and legends so complex we will never know the exactly the origins, but there certainly was something special about these fowl.

The glass being made in all the major glass producing cities in the old world used styles and techniques that go back in time as far as glass making itself. The “swan” continued to be used for many centuries in all of these old world glass factories.   Throughout time, the swans’ appearance was not always the same. Sometimes it appeared as a swan but more often it looked like a chicken or even a rooster, and sometimes it looked like a cross between the three. Whether or not this was intentional is not known, or were some of the glass workers  just poor craftsmen. There are many finials that look very much like a chicken or rooster as can be found at the Corning museum of Glass. With the hundreds of years and countless glass gaffers, it’s no wonder there are so many different interpretations of these birds.

In America from the late 18th century up until the early 20th century, glass blowers, and even the Pennsylvania German redware potters, used the swan, the chicken and the rooster for decorating their wares. Most commonly seen as a finial on the lid of a sugar bowl or other lidded vessel as were made at the Wistarburgh Glass Factory in the mid 18th century. They are also found on or in  lamps, mantle ornaments, salts, toys and paperweights as were made at the Sandwich Glass Works in New England in the mid 19th century and also in the latter 19th and early 20th centuries at Whitall Tatum Glass Works in Millville New Jersey. At that time in history, I believe the use of the chicken or swan in the previous centuries was meant as a symbol of good luck and prosperity. The importance of the swan, chicken, and rooster seems to have been lost in the last 80 years of the 20th century.