Home :: Articles:: Interesting Family History of a Pitcher made in Millville in 1808

Interesting Family History of a Pitcher made in Millville in 1808

In the area of early blown bottle glass very few pieces have any significant provenance . The American Museum of Glass in Millville has a pitcher with a long history of being handed down in one family. It is one of the few pieces of South Jersey Glass known with a traceable history.

In the early days of Southern New Jersey one of the winter past times was sleighing parties. The snow covered roads made traveling more pleasurable compared to the rough and muddy roads of the rest of the year. Groups of mostly younger people would take advantage of these conditions and travel by sleigh from town to town stopping at a tavern for something warm to drink and to eat. Another popular place to visit would be one of the local glass houses. The glass factories welcomed visitors, they provided warmth, entertainment and also offered for sale wares that were made there. Also available were non production items "whimsies" of all kinds made in glass. These non production items probably gave the glass workers a chance to show off their skills and to make some extra money. The owners of the glass factories allowed its employees to make things on their break time and after business hours. 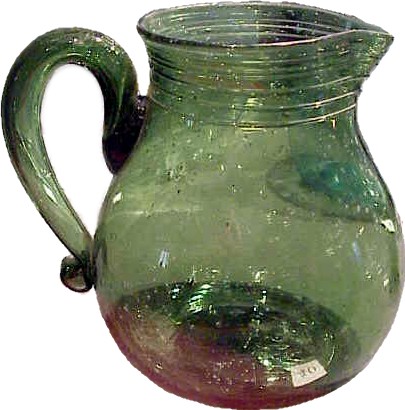 On one of these sleighing parties in the winter of 1808 David Dare and some of friends were traveling from their home in Bridgeton to Millville. At that time, Millville was a small hamlet with a mill, a tavern, a school, three stores, several houses and a glass factory. On this particular trip they stopped at the Glass Factory that was owned by James Lee. Lee had operated this company since 1806.James Lee was not new to glass making he had come from Port Elizabeth after making glass with some of the Stangers. While David Dare and his friends were visiting there that winter night he purchased a pitcher as a gift for his future mother in-law Mary Fithian, it was made from dark green bottle glass. This pitcher is the earliest known piece of glass made in Millville. It was handed down through this family and always was highly regarded. Following is its history.

The acquisition of this important piece was made possible by a generous gift from Harriet Smith and the Wheaton Village Volunteer Glass Blowers.